Webbed fingers (syndactyly) in Apert Syndrome is one of the distinguishing features which can affect the quality of the patient’s life, both emotionally and physically, if not corrected surgically. One of the problems associated with Apert Syndrome is the presence of syndactyly, the fusion of two or more digits both on the hands and the feet. The fingernails and toenails may be joined as well. 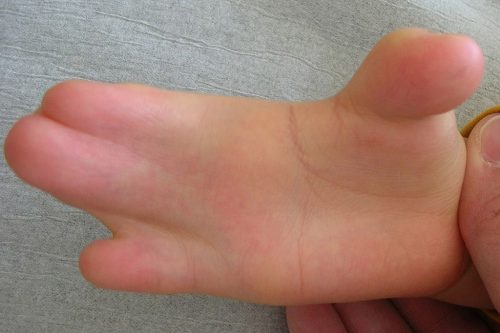 While syndactyly on its own can often be corrected with a fairly simple surgical procedure (especially when the digits are joined by only skin or soft tissue), Apert Syndrome patients typically have syndactyly of a more complex nature involving multiple digits. These hand anomalies are often severe enough to prevent normal functionality, and multiple surgeries are usually required to separate the digits in order to achieve as much normal function as possible.

Three categories, called Upton syndactyly classifications, are used to determine the severity of syndactyly in Apert Syndrome patients. Upton classifications are based upon the degree of bone and soft tissue involvement and include:

The digits affected in Apert Syndrome often have fewer joints which function normally and, as a result, the patients may have difficulty developing fine motor skills. However, with timely surgical intervention and occupational therapy, a child with Apert Syndrome can learn to function as well as other children, and do quite well overcoming their limb anomalies.

Syndactyly Release Surgery of the Hands

In most cases of Apert Syndrome, surgical release of the border digits is recommended at approximately 6 months of age because these digits can become permanently deformed if prolonged syndactyly is allowed. Bilateral surgery (both hands at once) is performed when possible to reduce the number of surgeries the patient must undergo and to minimize risk involved with surgery. The younger the child, the more well tolerated bilateral release of the digits is. When older than 18 months, unilateral release is generally performed since the child is significantly more active at that time.

At approximately 1 year of age, it is recommended that the middle two fingers be separated. Completing all major reconstruction surgeries by the time a child is of school age is preferred due to developmental, functional, and psychological reasons. While other techniques for syndactyly release are available, skin grafting is most often utilized to perform the reconstruction procedure connected with Apert Syndrome.

Complications after syndactyly release surgery can include:

Goals of syndactyly release surgery are:

A re-release procedure may need to be performed in instances of recurring syndactyly. In most cases of Apert Syndrome, syndactyly release surgery is extremely beneficial in improving hand functionality and hand/finger appearance.

After syndactyly release hand surgery, your child will be in a cast or casts. You will have several follow-up appointments, and after the cast is removed, your child will be fitted for a splint to help prevent scarring and contracture (shortening of tissue).

In cases of extensive surgery, occupational therapy may be utilized to assist with scarring, swelling and stiffness.

Syndactyly of the Toes with Apert Syndrome

Syndactyly of the toes is far less debilitating then that of the fingers and does not usually necessitate early treatment unless the ability to walk is affected. Many parents, however, choose to have their child’s toes separated in conjunction with syndactyly release of the fingers. Separating fused toes is primarily done for aesthetic purposes.

Children with Apert Syndrome can develop prominent bone issues in the feet which may cause walking difficulty later in life that may require surgical intervention at that time.

The Craniofacial Team of Texas performs syndactyly release surgery on fingers and toes of Apert Syndrome patients. At CTOT, we are committed to meeting the needs of all our patients and their families through a multidisciplinary approach which addresses all facets of the condition we are treating and the health of each patient physically and emotionally.

If you would like more information about the treatment for Apert Syndrome or the limb anomalies associated with Apert Syndrome, please contact the Craniofacial Team of Texas by calling 512-377-1142 or toll free 877-612-7069 to schedule an appointment or complete an online appointment request.