Distraction osteogenesis, or bone lengthening, is a surgical procedure which involves cutting and slowly separating bone, allowing the bone healing process to fill in the gap. 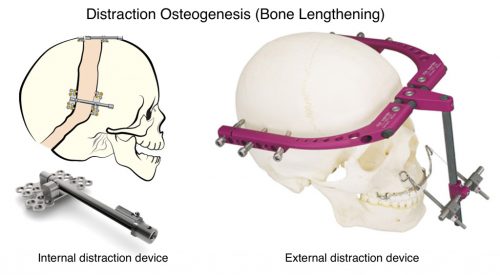 Distraction osteogenesis, bone lengthening, is an established surgical technique that allows for molding, shaping, and lengthening of bone.   The procedure involves making controlled cuts, or osteotomies, in the bone, and using a device to gradually separate, or “distract”, the bone fragments.  The fragments are then held apart by the distraction device over a period of 1-3 months, during which new bone forms, a process called “osteogenesis”.  Distraction osteogenesis has been used in orthopedic and hand surgery to lengthen bones in the extremities, and the technique has more recently been applied to the craniofacial skeleton.

How does distraction osteogenesis work?

During the activation period, the distractors are gradually turned and the bone segments are gradually pulled apart.  Careful design in surgery determines the vector of distraction, or the direction and angle the bone segments are pulled apart considering the desired final result.  The timing and extent of distraction performed during each turn of the distraction devices is termed the rate and rhythm.  The rate of distraction refers to the number of times each day the device is activated.  The rhythm denotes the distance per turning episode that the bone distracted.  For example, if the distraction device is turned twice a day for a distraction of 0.5 millimeters (mm) each time, the rate is two times a day, and the rhythm is 0.5 mm.  This is a typical rate and rhythm for distraction osteogenesis, but may vary based on age and the part of the skeleton being distracted.  Infants undergoing mandible distraction often have a rate of 2 times a day, with a rhythm of 0.9 mm each time.  During the activation phase, new blood vessels develop in the area between the bone segments.  Cells that create collagen, a structural protein crucial in wound healing and a key component of the structural support of the body, migrate into the bony gap and begin creating collagen.

After the desired length of bone is achieved by the activation phase, the consolidation phase begins.  During this time, which lasts 1-3 months, the distraction devices are no longer turned, but act as rigid fixation devices holding the bone to length.  The area between the bone segments forms new bone.  Within the gap between the bone segments, the bundles of collagen become calcified, and osteoblasts appear.  These are the cells that create new bone.  The bone forms from the edges of the cut bone towards the center of the generate, which is the term for the newly formed bone.  Finally, osteoclasts, the cells that remodel bone into mature bone, appear within the generate.

After the consolidation period, the distraction devices are removed.  This is also an opportunity to revise scars if needed.

What are the types of distraction devices?

For which patients is distraction osteogenesis appropriate?

When more bone is needed in the craniofacial skeleton, there are three options: bone grafting, free tissue transfer, and distraction osteogenesis.  Each may be appropriate in reconstruction of the craniofacial skeleton depending on the situation.  Bone grafting involves removal of bone from one part of the body and placing it elsewhere, where there is a paucity of bone.  This works when there is healthy soft tissue, and when the amount of needed bone is small.  Free tissue transfer involves taking bone with its blood supply (the artery and veins supplying the bone with blood) from one part of the body, transferring the bone, and connecting the blood vessels under a microscope to blood vessels near where the bone is needed (see the microsurgery page).  This option is ideal when large amounts of tissue are needed, in areas with poor blood supply, and when extra soft tissue is needed in the defect, as soft tissue can be included in the flap.  Distraction osteogenesis allows for creation of new bone without taking bone from elsewhere.  It does require a healthy soft tissue envelope.  An added benefit is that the process of distraction osteogenesis allows for expansion of the soft tissue, as well.  This is called distraction histiogenesis.