Microsurgery refers to surgery on a scale beyond the abilities of unaided human eyesight. 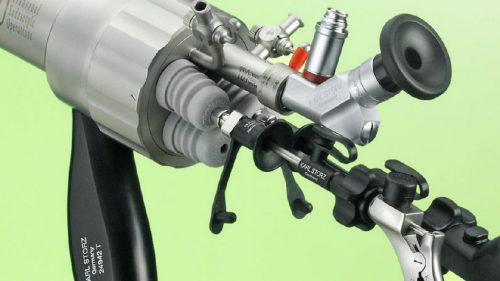 What kinds of wounds are treated with free tissue transfer?

The decision to treat a wound or deformity with free tissue transfer depends on the size and complexity of the wound or deformity.  The first factor is the size of the wound.  Small wounds can be treated by simply letting them heal (healing by secondary intention), or by closure with sutures.  Larger wounds may be treated by local tissue rearrangement (local flaps) or by skin grafting.  Very large wounds require more tissue to close.  These may be treated by tissue expansion or free tissue transfer.

The second factor determining the need for free tissue transfer is the complexity of the wound or deformity.  Certain wounds have important exposed structures underneath, such as bone, fractures, tendons, nerves, or blood vessels.  These wounds require healthy tissue as coverage in order to heal and preserve function.  Other cases may involve the bone itself, in which case a bone may be included in the free tissue transfer.  Certain patients have complex congenital, traumatic, or cancer-related deformities, particularly involving the head and neck.  Free flaps provide the best solution to optimize both form and function.

How is free tissue transfer performed?

Surgery involving free tissue transfer often requires more extensive preoperative evaluation than other operations.  This may include CT scans, MRIs, or angiograms to examine the blood vessels near the defect and near the proposed flap.  When bony reconstruction is needed, as in reconstruction of the mandible or lower jaw, the operation is planned virtually through computer meetings in order to design a precise reconstruction based on the patient’s specific anatomy (see virtual surgical planning).

Surgery typically takes 6-10 hours.  While this does seem like a long time, it is important to note that long surgery does not necessarily equate with risk or danger to the patient.  Free flap surgery is meticulous, involving very small blood vessels, and takes longer, for this reason, than other types of surgery.  Two teams of surgeons are often used.  One team prepares the defect.  For example, in the case of head and neck cancer, one team will excise the cancer and prepare the nearby blood vessels for microsurgery.  The other team harvests the free flap at the same time.  After surgery, the flap is carefully monitored to ensure that it has adequate blood flow.  This may be done in a number of ways, including frequent observation, listening to the blood vessels with a Doppler ultrasound, or probes that measure the blood flow through the flap.  Such close monitoring requires a high level of nursing care, which is typically accomplished in the intensive care unit (ICU).

Most free flaps do well after surgery.  In a small number of cases, there may arise issues with the blood flow to or from the flap, across the very small arteries or veins which were connected during surgery.  In such cases, the problems are identified by the close monitoring regimen and may require an urgernt return to the operating room to fix the blood flow problems.

After monitoring for a few days in the ICU, the patient is transferred to the general surgical floor.  Management of the flap after that depends on the type of flap used, and the area that was reconstructed.

What will happen to the area of the body from which the tissue was taken?

The goal of reconstruction is to restore form and function without causing significant loss of function elsewhere.  We want to return the patient to the best life possible.  For that reason, the tissue chosen for free tissue transfer does not typically result in a significant handicap or loss of function.  The human body is filled with redundancy, which means that there is frequently more than one structure performing a certain function.  For example, the gracilis muscle is frequently used in free flap reconstruction.  Its function is to adduct the thigh, or move the thigh inward.  Even after the gracilis muscle is transferred elsewhere as a free flap, there are 6 other muscles in the thigh that perform the same function.  Choice of the free flap used in reconstruction is also determined by the specific needs of the patient.

That being said, a free flap is removing tissue from one part of the body and placing it elsewhere.  This will leave a scar, possible numbness, and potential other effects depending on the tissue being used.  The amount of tissue needed may preclude closing the donor site, which is the term for the defect caused by removing the free flap from that area of the body, directly.  Closure of the wound may require techniques such as skin grafting.

What kinds of free flaps are there? 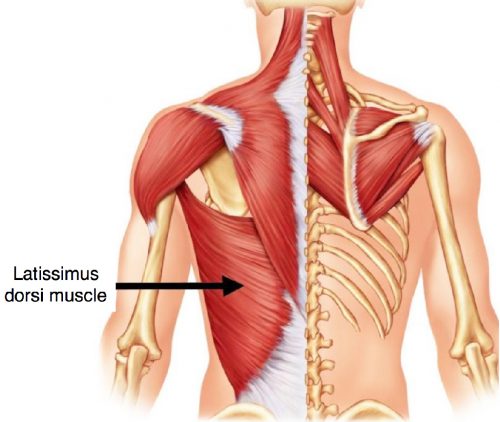 The latissimus dorsi is a long, broad muscle in the back.  Because of its size, it is often used to cover large wounds.  It may be used as a muscle flap, which requires the use of a skin graft on top of the flap, or may include skin with the muscle. 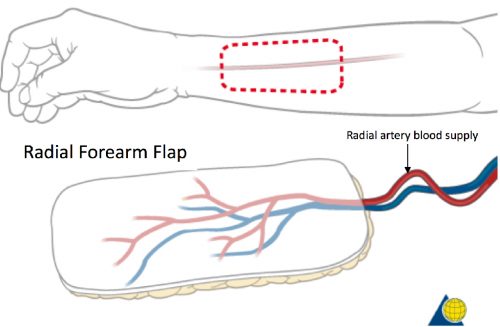 The radial forearm flap is a fasciocutaneous (including skin and fascia) flap from the forearm which uses the radial artery as its blood supply.  The hand has two major arteries giving it blood supply: the radial artery and the ulnar artery.  The ulnar artery is typically the dominant artery supplying the hand, meaning the hand gets most of its blood from this artery, and the radial artery and some of the skin it supplies can be used without ill effects to the hand or forearm.  The radial forearm flap is very thin, and is used when thin skin is needed for reconstruction, as in reconstruction of the tongue for cancer.  It may also be used as a local flap and rotated to cover wounds of the hand. 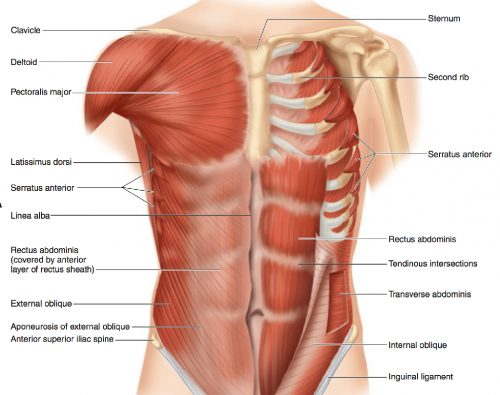 The rectus abdominus muscle is in the abdomen, and is familiar as the muscle which appears as the “sis-pack” in very fit people.  The muscle may be used in reconstruction.  The flap may also include the skin and fat of the abdomen, as in the transverse rectus abdominus myocutaneous flap, or TRAM flap.   Alternatively, some or all of the muscle may be left in place and only the abdominal skin and fat used in the flap along with the artery that supplies the rectus muscle and overlying abdomen.  These are called muscle-sparing TRAM flaps if some of the muscle is used, or deep inferior epigastric perforator (DIEP) flaps is all of the muscle is spared.  These flaps are frequently used in breast reconstruction. 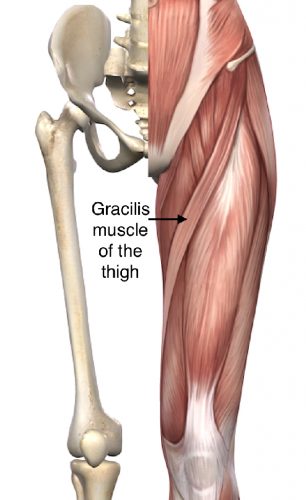 The gracilis muscle is a long, thin muscle in the inner thigh.  It is used in smaller defects, or may be rotated to cover wounds in the thigh.  The gracilis muscle may be harvested with its nerve, and connected to nerves in other parts of the body to provide lost function.  Gracilis flaps are frequently used in facial reanimation (see facial nerve). 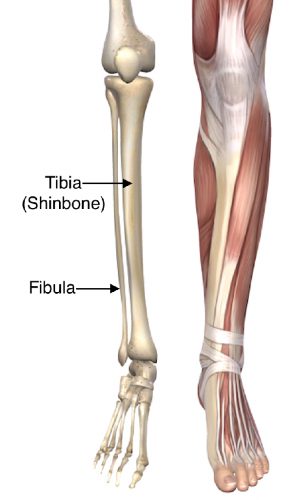 Along with the tibia, the fibula is one of the two long bones of the lower leg.  The tibia provides the vast majority of structural support of the leg, supporting the weight of the body.  The fibula can therefore be used as a free flap without significant functional loss.  This flap can be used with only the bone, or a large, thin paddle of skin can be included.  This makes the fibula ideal for reconstructing the mandible (lower jaw).

If you would like more information about microsurgery, please contact the Craniofacial Team of Texas by calling 512-XXX-XXXX to schedule an appointment or complete an online appointment request.